Mayor says construction in DTSB should be done on Friday 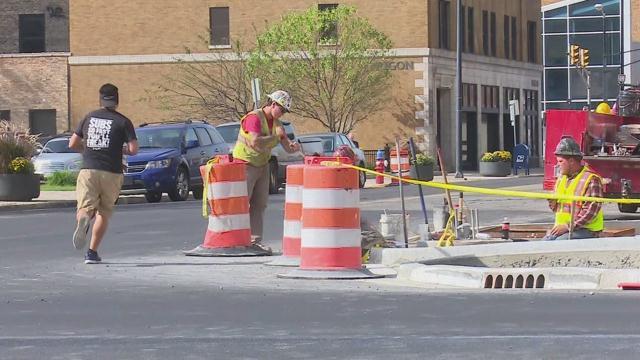 Construction is in full effect in Downtown South Bend. But city officials are saying the work on Main Street should be cleared up by Friday.

Mayor Pete Buttigieg says it is an aggressive goal but he hopes that in two days Main Street will open as a two way street.

All summer long the construction has played a role in the lives of everyone visiting, working, or living in the downtown area.

“I just run through it, but with the construction it’s been a little chaotic,” says Simon Ricapa a Jimmy Johns Delivery Man.

Ricapa takes each delivery very seriously but says he has treated the torn up sidewalks as an obstacle course.

Multiple times a day he runs to the County City building, across the construction on Main Street, carrying a sandwich bag.

Ricapa says the smart streets work slows him down and he has tried to make a deal with construction workers.

“I talk to the construction people (asking) when are they going to finish and they say next year, but I say tomorrow right? I try to make a bargain, saying we will give you free sandwiches,” says Ricapa jokingly.

Mayor Pete Buttigieg knows just how important it is to get the construction done so people are not idling in traffic while sidewalks are widened, parking spots created, and traffic flow reconfigured.

“I have to say people have been remarkable patient, I get the frustration, me too because I commute downtown to work every day,” says Mayor Buttigieg.

Mayor Buttigieg admits the smart streets initiative is a little behind on Main Street but says they have set a new ambitious goal that should be done by Friday.

“My hope is that most of the nay-sayers when they actually see it what is adds up to and they see what it does for our city they will come around and appreciate it,” says Buttigieg.