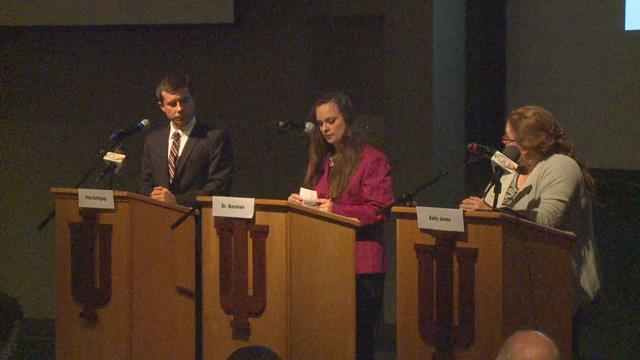 The public got the opportunity to ask the candidates questions about city issues.

Crime, economic growth and public safety were the top issues covered, but the Smart Streets initiative was one of the biggest issues of the night.

One of those unhappy with Mayor Pete’s Smart Streets was Kelly Jones.

“I’ve never had an idea, never made a decision that has pleased 100-percent of the people all the time. Toughest job I’ve ever had, but unquestionably the best. It may be the best job I’ll ever have, the opportunity to serve your hometown. A chance to be not only active but make an impact,” said Mayor Buttigieg.

Jones suggested going back to the way things were.

Buttigieg says Smart Streets has contributed to economic development downtown more than what most people know.

For political science major Elizabeth Rivera it was a window into what a career in politics might be like.

“I think it’s a once in a lifetime opportunity. It’s really neat to see your major in real life. You get the real life experiences and you get to see things that you might possibly do after college,” said Elizabeth Rivera.