Mayor's plan could mean a loss of some city jobs 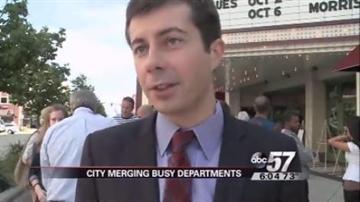 SOUTH BEND, Ind. -- To save money, South Bend's mayor plans to combine Code Enforcement and the Building Department. On Wednesday, employees were called together and told they could lose their jobs.

Michelle Valentine is just one of the hundreds of residents who have dealt with South Bend Code Enforcement.

"It was three days, so I thought that was a very quick turnaround," said Valentine.

She said it only took three days for an inspector to come out and inspect her property after she called the department.

Employees worry if the mayor has his way and combines Code Enforcement with the Building Department, and employees lose their jobs - residents will end up waiting much longer for the services they need.

"We have to make sure that we are still meeting the needs of our citizens when it comes down to being able to provide effective and efficient services," said Oliver Davis, South Bend Common Council member.

"Expenditures are down this year by 3.4-percent. Some of that is connected to personnel so I would expect a combined department with the efficiencies maybe a smaller and leaner department as well," said South Bend Mayor Pete Buttigieg.

Employees in both departments were told Wednesday afternoon that they can reapply for their jobs --but not to assume that their jobs will be there.

"One of the reasons that we share this with employees yesterday was to make sure that they have a chance to prepare and least understand what's being discussed," said Buttigieg.

Davis thinks the mayor should have consulted the council first.

In fact he told ABC 57 that he thinks both departments could use more employees - not fewer.

"To create that uncertainty at the time that we go into budget season is something that adds to the level of crisis," said Davis. "We have seen this year a lot of cuts and firings in animal control and that one area alone has sent ricochet all over through the whole organization."

Oliver Davis says the next council meeting is on August 26 and he says they will be talking about the mayor's plan.