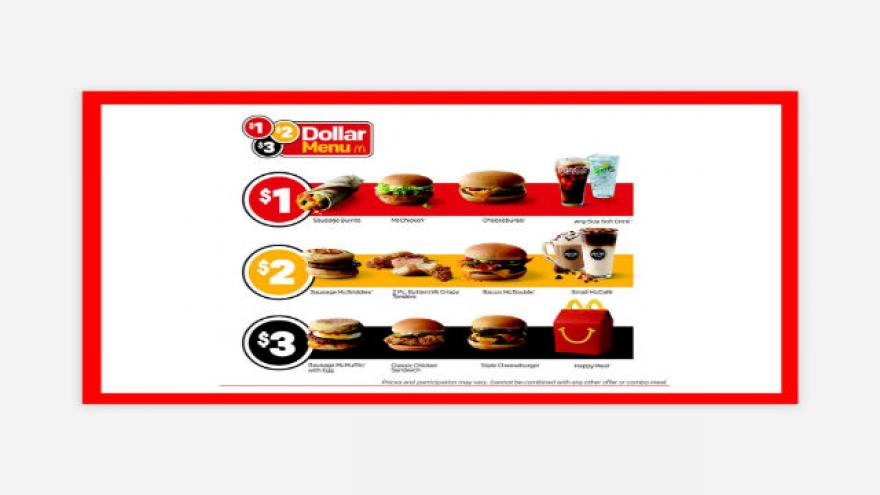 McDonald\'s is rolling out a new menu that includes $1 items, but unlike the popular Dollar Menu that it tweaked out of existence years ago, this one includes more costly items as well. Photo courtesy McDonalds

(CNN Money) -- McDonald's is bringing back its legendary Dollar Menu ... sort of.

The fast food giant is rolling out a new menu that includes $1 items, but unlike the popular Dollar Menu that it tweaked out of existence years ago, this one includes more costly items as well.

The name speaks for itself. The new menu, which McDonald's plans to roll out on January 4, is called the $1 $2 $3 Dollar Menu as a return to value offerings for its customers.

The fast food chain first introduced the Dollar Menu in the 1990s but started tweaking it to include higher priced items in 2013, when the company was suffering from a sales slump. It called that menu the Dollar Menu & More.

McDonald's profits have increased significantly this year, compared to last year, and its stock price has soared by about a third.

"We built this menu with variety and value firmly in mind," said Chris Kempczinksi, president of McDonald's USA, in a statement.

The new menu will offer $1 items like sausage burritos, McChicken sandwiches, cheeseburgers and soft drinks of any size.

The $2 items will include Sausage McGriddles, 2-piece Buttermilk Crispy Tenders, Bacon McDoubles and small McCafé beverages (but not coffee or iced coffee.)

The $3 items will include the Sausage McMuffin with Egg, the Triple Cheeseburger and the Happy Meal. This will also have a new item called the Classic Chicken Sandwich.

It's the first time Happy Meals have been included on a value menu, according to McDonald's.