McGraw seeing her team begin to turn the corner 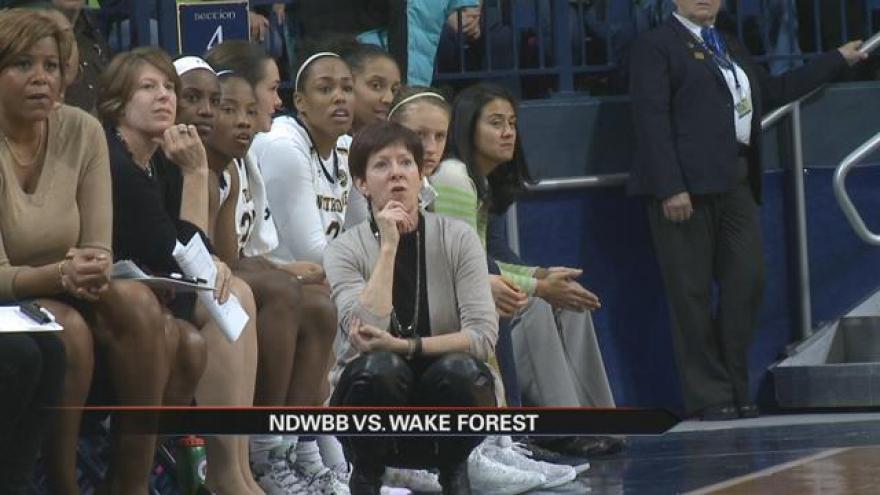 It's rare to see Notre Dame Head Coach Muffet McGraw be happy when talking about her team committing 21 turnovers on the road last Sunday against Miami.

"I mean that was huge win. A ranked team on the road, didn't play well. I mean there were so many things against us so I think that gives me great hope and confidence for the future," McGraw said.

Notre Dame was firing on all cylinders on the offensive end, shooting 50% from the field but it's the big picture of the offense that has McGraw excited considering she's been waiting for it for about a month.

"I think we were really just focused on throwing it inside was so nobody else was feeling like they had the opportunity to shoot the ball so running a little more motion, giving people other opportunities then looking for Bri within the framework of the offense," McGraw said.

During the second quarter, senior point guard Lindsay Allen sat for most of it with foul trouble, which would normally mark trouble for this Irish team, but sophomore guard Ali Patberg, getting her first significant minutes held the Irish together and allowed Notre Dame to maintain its lead.

"What she did for us offensively, she got us into our stuff, so I was really happy with her. It's a really big moment for the whole program, okay now we're finally getting there, getting people healthy, and getting where we need to be," McGraw said.

And McGraw knows last Sunday's win over Miami means so much more going forward for her team.

"I think when we can play a game like that and get a win over a ranked team, I think we're really going to be on our way," McGraw said.