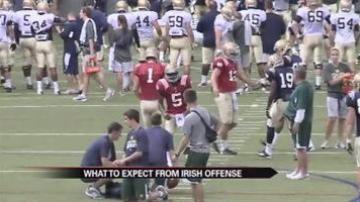 With just 2 weeks left until the Irish hit the road for Dublin,  there are still several question marks on the Notre Dame offense.

How will they fill the void left by Michael Floyd?  Who’s the new go-to-man? And of course, who will be the starting quarterback?

Notre Dame Head Coach Brian Kelly says there will be plenty of movement within the skill positions. Coach Kelly has said repeatedly that the Irish will not be able to replace Michael Floyd, but, the team will adjust to his fill role.

As for quarterback, Coach Kelly says he’s getting closer to a final decision.

With no Floyd and the quarterback position up for grabs,  the Notre Dame offense is a bit of a mystery.

“I think it’s going to come down to execution if we move the ball,” said Offensive Coordinator Chuck Martin.  “If we can execute and continue to move the ball and keep a physical mentality both inside and outside I think we’re definitely going to have the opportunity to score points.”

On the outside, senior tight end  Tyler Eifert is the leading candidate for the new go-to man. With 63 receptions and more than 800 yards last season, Eifert could be the versatile player the Irish are looking for.


“Tyler’s a great wide receiver, a great tight end,” said sophomore quarterback Everett Golson. “You know we’re kind of moving him around just really try to get him the ball because you know anytime you go to him he’s going to come up big for us.”

But Eifert says there’s plenty of other options for the Irish offense.

“I mean you can go up and down the line,” said Eifert. “There’s a lot of guys that can make plays and I think our offense and our staff will put them in position to make plays.”

And there’s the next big question mark… who will be the one making those plays? Golson and Andrew Hendrix are still splitting reps 50-50 during practice.

“It is tough to think about it because at the end of the day it ultimately is Coach Kelly’s decision,” explained Hendrix.

Coach Kelly says he’ll start separating the reps for the quarterbacks on Monday, but that doesn’t mean he’s made a final decision.

“There’s still so much learning going on for all of the,” said Kelly of his quarterbacks. “So it wouldn’t’ be as cut at dry as hey here’s my number one. The door will still be open for growth during that week.”