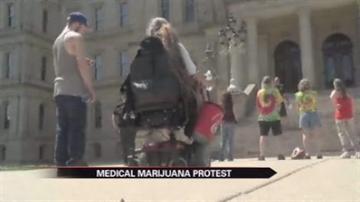 Supporters marched on the state capitol to protest new restrictions the state is considering.

Michigan voters approved medical marijuana in 2008 but several restrictions have been put in place since.

Now users and caregivers are fed up.

"It's got to be fair, it's just got to be even across the board.  I don't know if they could ever figure out a way to tax it or not, that wouldn't bother me," said Len Tabias, medical marijuana supporter.

Those with certain past convictions are also now banned from becoming caregivers to supply the drug.