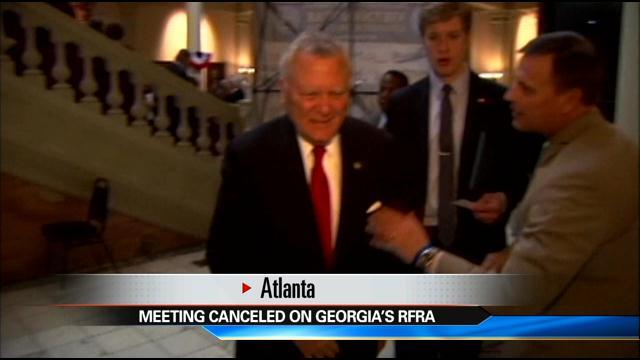 In Georgia, a house committee was about to discuss the state's Religious Freedom Restoration Act Monday, but instead canceled that meeting.

The bill would give people and businesses the legal defense to deny services to people in the LGBT community, according to CNN.

The Georgia Senate passed the bill earlier this month.

The cancellation comes amid backlash in Indiana.

Opponents of Georgia's bill say protests and threats of boycotts in the Hoosier state may have prompted Monday night's cancellation.

"This is legislation protecting First Amendment rights," said Mike Griffin of the Georgia Baptist Convention. "Really, it's a no-brainer."

"We now see that this bill is very clearly a vehicle to be used to discriminate against the gay and transgender community," says Jeff Graham of Georgia Equality.

It's unclear if a hearing will be rescheduled.

With lawmakers set to go home Thursday, opponents say they're taking no chances and are now planning a rally for Tuesday.