Meghan Rees arrested at her brother's football game over the weekend 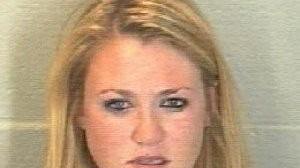 WEST LAFAYETTE, Ind. -- According to police reports, Meghan Rees was arrested over the weekend at Ross-Ade Stadium for public intoxication.  Meghan Rees is the sister of Notre Dame starting quarterback Tommy Rees.

While he was on the field, leading the Fighting Irish to a 38-10 win over Purdue, she was being arrested for allegedly picking fights in the stands.

said at around 8:30 p.m. on Saturday, officers received a report of a fight in section 116 of the stadium. When the officers responded, other fans told police that Rees was the person causing the disturbance.

Officers escorted Rees out of the stadium.  Police say the arrest was made on probable cause.  No one else was arrested in connection with the fight.

Officers were posted in the section to deter other fights.

Rees was sent to the Tippecanoe County Jail.