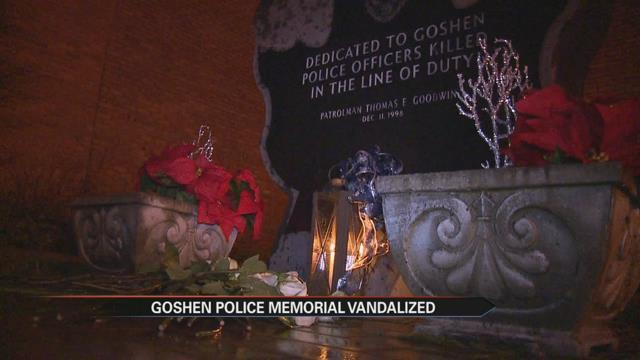 The Goshen community is in shock after a memorial honoring a fallen officer was vandalized Sunday night.

The memorial honors Officer Thomas Goodwin who was 31-years-old when he was fatally shot while on the job. Friday marked the 17th anniversary of his death.

The Goshen Police Department posted on Facebook about the vandalism, writing:

“How sad that our memorial honoring our fallen brother would be the target of a pathetic vandal.”

Goodwin’s influence reached more than law enforcement, many in the community say they were impacted by his life and death.

One of those people is lifelong Goshen resident Morgan Shepherd.

Although she was only a kid at the time Shepherd remembers December 11th 1998, the day of Goodwin’s death, like it was yesterday.

“My sister and I were actually at the babysitters in the neighborhood that the gunman was loose in. I remember being locked in the back not being told what was going on, all we knew is that there was a bad guy,” said Shepherd.

That gunman would go on to kill responding Officer Goodwin, who was with Goshen Police for eight years.

“He was actually a really good officer, good at doing his job. He was a people person and he just really loved this community and the people that he served,” said Shepherd.

Shepherd says Goodwin loved his community, and they loved him back.

“You can tell that he had done so much and so many people remember him and how good he was to the community,” said Shepherd.

Shepherd along with many others in the community who remember Goodwin, are outraged that someone from the area would do something to disrespect his memory.

“It’s definitely something to be ashamed of. But our town will work together to put things back together like they should be. I think we can learn from his example and just pull together and just help each other through this.” said Shepherd.