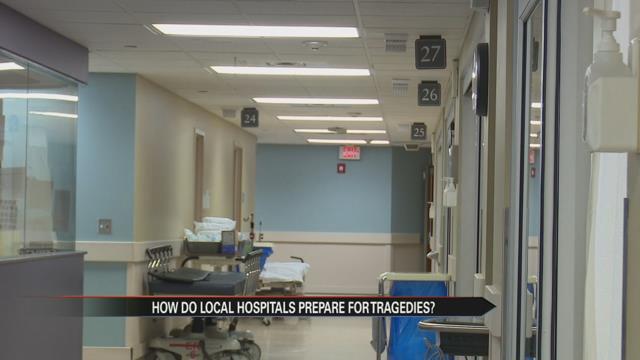 “I feel for all of my colleagues in Orlando, and I think they did an unbelievable and stellar job.” Scott G. Thomas, M.D., chief of trauma services at Memorial Hospital said.

Thomas says he and his colleagues have to be prepared to save a large amount of lives in a short period of time.

All trauma surgeons at Memorial carry a pager.

“It has the capability of putting out a page that identifies mass casualty,” Thomas said.

Then, the hospital find a place for each patient, and a job for each staff member.

“We are most likely going to over-triage an event like that,” Thomas said.

The drills and practice are where Memorial Emergency Preparedness Coordinator Elizabeth Buchanan comes in.

In October, they will have a mass shooter training.

Thomas and Buchanan say they’re prepared for the real deal, with the capacity to have eight trauma surgeons at one time.

But after watching his fellow surgeons in Orlando deal with the deadliest mass shooting in us history, Thomas says he hopes it never comes to that in Michiana.

“I know that they’ve been dealing with a lot of stress, grief, and the emotion that you have to go through when you have to deal with such an enormous issue,” Thomas said of his Orlando friends.