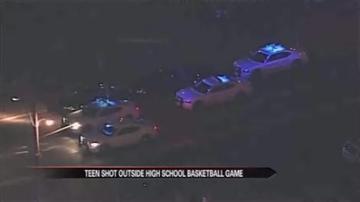 MEMPHIS, Tenn. — Police in Memphis, Tenn. are investigating a shooting at a high school.

The shooting happened Tuesday night during a basketball game.

Police believe that an 18-year-old male was hurt during the shooting.

Officials from the Memphis City Schools said there was a security officer at the game.

When he heard the shots, he went to help, but the shooter was already gone.