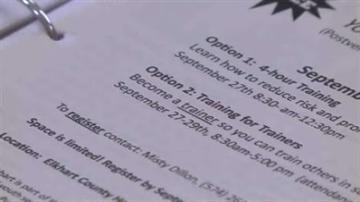 ELKHART, Ind. -- Members with the Elkhart chapter of the National Alliance on Mental Illness are hoping for more awareness following the mass shooting in Conneticut on Friday.

Charlotte Fletcher knows all too well what it's like to have a family member affected by a mental illness.

"You just feel completely alone," Fletcher said. "Especially, if nobody else in your family has ever had it."

So when she heard about Friday's mass shooting in Conneticut, she felt the same heartbreak we all did.

"I don't know, but I suspect people notice things before they happen," Fletcher said.

She leads the local chapter of National Alliance on Mental Illness (NAMI) and has been working, along with other members to create a change in dialogue.

"It's going to remind us that we need to keep it up," Sandy Imanse, a NAMI member and mental health worker, said.

Currently, there are a number of mental health centers and groups in Michiana.

Most get by without any federal or statewide funding.

"There are a lot of things that our money has to go for," Imanse said. "But taking care of our citizens is also something we have to look at."

Police describe the school shooter, Adam Lanza, as having a personality disorder, and while information about him and his motives is still coming out, local support groups hope tragedies like the one in Conneticut can be prevented by encouraging people who need help to seek it.

"We need to talk about it so people can get diagnosed earlier," Fletcher said. "And people who have family members aren't afraid to go get help."