Mercy Hospital up for auction 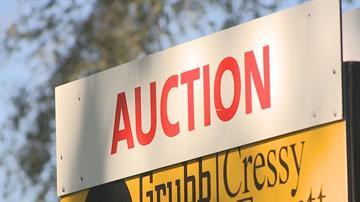 BENTON HARBOR, Mich. – The city’s biggest eyesore is now on the auction block. The old Mercy Hospital on Agard Street is 162,000 square feet of blight. The building takes up seven city blocks and has been collecting dust for more than a year.

An ABC 57 News report in May explained Berrien County’s failed attempts at demolishing the building. It looked as if it may sit vacant for perpetuity, now there are hopes a bidder can bring new hope.

“No one is over there at all,” said Benton Harbor resident Antonio Williams. “It’s just sitting there.” Williams has watched Mercy deteriorate since its last tenant, Intercare, left more than a year ago.

“Nobody’s real thrilled about looking at that through their windows,” said Berrien County Treasurer Bret Witkowski. “Because it’s not getting any better.” Witkowski admits he was disappointed when Berrien County’s attempts at demolishing the facility were unsuccessful.

Berrien County offered to demolish Mercy Hospital with a federal grant in 2011. The owner of the property, a Florida bank, passed on the offer hoping to make more money by selling the building along with the property.

The Florida bank only received one bid for $300,000 under a condition that the building was torn down. When the bank finally approached Berrien County for demolition, grant money had already been allocated. “Hopefully (now) it falls into someone’s hands where someone can do something with it,” said Witkowski.

On October 10th, South Bend based Grubb and Ellis will be auctioning off Mercy Hospital online starting at $300,000. Casey Kaniewski with Grubb and Ellis told ABC 57 News Monday that the property is generating interest.

Estimates done by Benton Harbor City are that $1 million would be needed to either fix Mercy Hospital to code or tear it down.  “I’m not sure what the future of that facility holds,” said Witkowski. “As it stands it doesn’t look real bright.”

“Something needs to be done to it,” said Williams. “It’s not serving a purpose.”

Kaniewski said the owner of the property could be looking into more grant money to tear the building down. Witkowski said there is a small chance more state funding is allocated for demolition.

The listing and auction information can be found here.