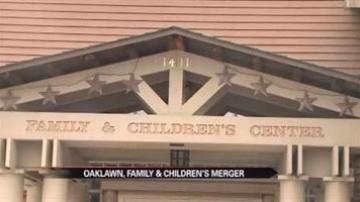 ST. JOSEPH COUNTY, Ind. -- Big changes are in the works for the Mishawaka Family and Children’s Center, which is dedicated to helping children and their families. Concerned it may have to shut down, a merger with a similar facility will keep it afloat.

Deep cuts in reimbursement rates from the Department of Child Services has left the Family and Children's Center $735,000 in the hole.

"The losses have been so significant that as an organization, and our management and our board of directors decided we really could not continue to sustain these losses,” said Bruce Greenberg, President of Family and Children's Center.

Financial hardships forced the facility to nearly cut its staff in half. Patient numbers were also cut in half.

They needed a partner to stay afloat.

Together, the FCC and Goshen-based Oaklawn have 180 combined years of serving the community's vulnerable children.

Both agree the merger makes sense.

"It comes from a recognition that times change and you have to be flexible and responsive especially when times get tough,” said Laurie Nafziger, President of Oaklawn Psychiatric Center, Inc.

The two campuses plan to merge both their missions and youth with little difficulty.

"Finally when it's all said and done- nothing matters more than the mission. And in our case that's been about serving traumatized youth and families,” said Nafziger.

The bigger the center, the more funding- so both centers are looking forward to an increase in resources.

The merger will go into effect January 1st.

Starting then Oaklawn will not only run the day-to-day operations of the children's campus, but it will also re-locate the youth in Elkhart County to the 12-acre property in Mishawaka.