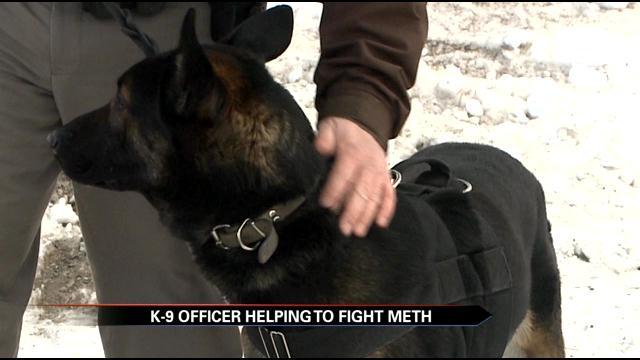 The Starke County Sheriff's Office went to a residence at 1833 E 350 S Knox to confirm a registered sex offender's address on Monday.

When the officer approached the residence with his K-9, he noticed an HCL generator in a trash can and another one on the ground, which is an item commonly used to make Methamphetamine.

37-year-old Michael Meeks and 39-year-old Stacy Tramaine, both from Knox, were arrested along with a 17-year-old juvenile male.

They were arrested on various felony charges including dealing and possession of Methamphetamine.

The male juvenile will be taken to Muskegon River Youth Center in Ladoga until his initial court hearing.

Their bond has not been set at this time.

The meth lab bust on Monday included the newest officer, a K-9 that is helping the department step up their game in the fight against drugs.

As of January 1 of this year, the Dutch Sheppard named Terror is aiding officers in this effort.

"His nose and eyes are a lot better than mine," said Robert Olejniczak, Terror's handler and Starke County Chief Detective. “We're trying to concentrate on the heavy use of meth and heroin in Starke County, that's why the Sheriff got us this dog and right now he's been deployed quite frequently on any type of meth or heroin cases."

Already Terror has aided in nine arrests that have led to 24 charges.

Along with the K-9 being added to the team, the department is also increasing their man power according to Sheriff Bill Dulin.

“They've rotated around their officers to have more eyes on the streets at night. This will include more drive arounds and traffic stops throughout the county," said Dulin.

Sheriff Dulin also said they have a common problem with inmates making contacts while they're in jail and trying to get those contacts to supply them with drugs.

"They will put drugs in the mail or have someone drop them off outside the building," said Dulin.

Now with Terror, he is able to sniff out all incoming and outgoing mail as well smelling around the perimeter of the building to stop that problem.

He says the department is already looking at options to bring in another K-9 in the future.