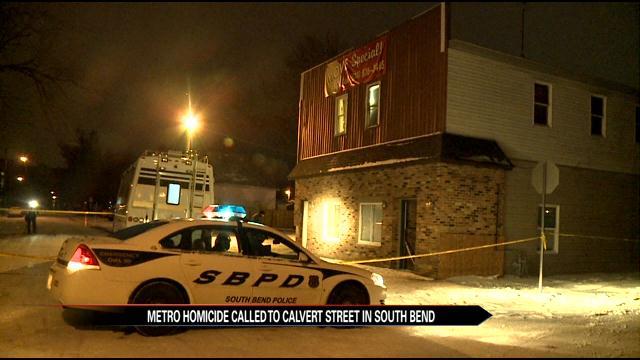 During a press conference Monday, the St. Joseph County Metro Homicide Unit announced Roy Lee Walker has been arrested on two counts of murder in the deaths of a man and a woman who were killed on East Calvert Street in South Bend Sunday night.

The incident happened at 202 East Calvert Street around 7 p.m. Sunday.

Investigators were called out at 7:10 p.m. on an armed disturbance call. A nude resident allegedly threatened the person who called police with a firearm.

At the apartment building, South Bend Police found blood and footprints in the snow outside the building.

Inside and upstairs, officers found a deceased male with gunshot wounds in an apartment. He was identified as Robert Joseph Duke.

The female victim was found deceased, also with gunshot wounds, in an apartment. She has been identified as 43-year-old Michelle L. Blankenship.

Police found two other residents of the upstairs apartments and spoke with them.

Stanley Shaw and Sean McGuire both said they had encounters with fellow resident Roy Lee Walker.

Shaw told police he was inside his apartment when he heard a loud argument in Walker's apartment. He then heard a crashing noise in the front of his own apartment.
Shaw said Walker forced the door open, pointed a gun at his face and pulled the trigger The gun did not fire and Shaw ran into another room and barricaded himself inside.

Shaw said he heard another loud crash and multiple gunshots in another area of the apartment.

Then, the door he barricaded was forced open and Walker began firing into the room. Shaw pushed on the door to keep it from opening further and Walker pulled his arm out and left.

Neighbor Sean McGuire told police he heard a crash at his front door and had to force the door open. He then saw Walker in the hallway, naked, armed with a screwdriver.

Walker allegedly said, “I'ma shoot you, too!” and threw the screwdriver at McGuire, according to court documents.

McGuire went back into his apartment and armed himself with a knife to protect his family.

In the hallway, he again saw Walker. Walker was armed with a wooden chair and threw it at McGuire.

After securing his family, McGuire went into the hallway and saw blood and footprints in the blood, along with the wooden chair.

McGuire went back into his apartment and called 9-1-1.

Just a few minutes later, 9-1-1 was called about a vehicle that had struck several parked vehicles in the area of St. Joseph and Chippewa streets, less than two miles from the Calvert Street apartment building.

Officers found a Chrysler Sebring abandoned in the road, clothing around the car and a trail of bloody bare footprints leading away from the Sebring.

A resident on Fellows Street then called police about a stranger on his porch asking for help. When an officer arrived, he found Walker wearing a shirt, two pairs of blue jeans and socks. He had reddish brown stains on his clothes and a rope around his neck.

Walker was taken into custody and transported to the hospital.

At the hospital he allegedly said, “I did the crime. I did crazy things. I am ready to go, so take me. I just want some peace."