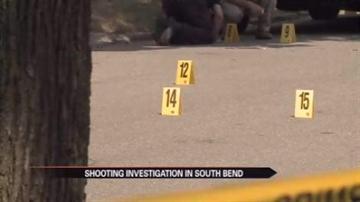 SOUTH BEND, Ind. -- According to South Bend Police, at 2:15 p.m., more than a dozen bullets were fired from a car as it sped down Vasaar Avenue and Huey Street.

No one was hit by the gunfire, but Metro Homicide Commander Tim Corbett said the closest ones to becoming victims were kids.

Metro homicide investigators believe the gun violence is fueled by gang activity and they believe the drive-by shooting is connected to the string of shootings that took place on Saturday night.

Police say they will work around the clock to put a stop to the killings.

Back near the scene, neighbors are having talks about what they can do to save the community.

No arrests have been made.  Metro homicide is continuing the investigation.  Police ask that anyone who knows anything please come forward, even if it is done anonymously.