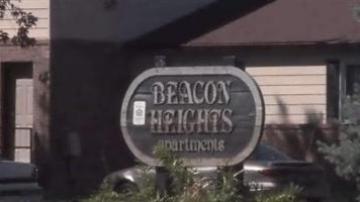 SOUTH BEND, Ind. -- The St. Joseph County Metro Homicide Unit is investigating a death of a 4-month-old infant that was found dead in in a Beacon Heights Apartment Saturday afternoon. The 21-year-old mother told police she woke up around 1:45 in the afternoon and found her baby girl dead.

The St. Joseph County Coroner conducted an autopsy on the infant on Monday afternoon. Lt. Dave Wells with Metro Homicide told ABC 57 News the preliminary results are the death was caused by positional asphyxiation. Which mean the baby suffocated due to being positioned in such a way she couldn't breathe.

Lashawnda Parker said, "I knew something serious was going on Saturday afternoon." Parker lives at Beacon Heights Apartments. She says she knew something was wrong when she saw the police, medics and fire trucks pull up around 2pm. She witnessed them going into a nearby neighbors apartment.

Captain Phil Trent with the South Bend Police Department said, "They arrived and found a 4-month-old child not breathing, officers tried to preform CPR. However, ultimately that was unsuccessful. So Metro Homicide was called just because we've got so many questions relating to the death."

Trent said the report taken stated the Mother said on Friday night she got a babysitter and went out with friends, when she came home the babysitter left and she put her daughter in bed with her and fell asleep. Around 1:45 in the afternoon the woman claimed to wake up. "Quite a bit later the mother awoke and the child was unresponsive."

Lt. Wells said they still have interviews to do to be able to complete this investigation. The mother allowed them to draw her blood for lab tests and they have conducted toxicology testing as well. The test will reveal if drugs or alcohol was in her system and how much if so. Information that could help investigators determine how a tragedy like this happened.

Parker said, "I feel sad about her and her loss. My condolence goes out to her and her family."

Parker said the women hasn't been seen since the incident and people in the neighborhood believe she is staying at her mother's house for time being.

Metro Homicide continues to work on this case and we will bring you more developments as they become available.