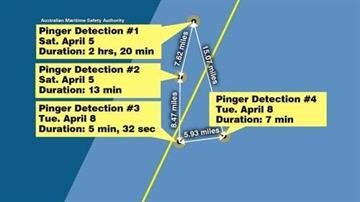 (CNN) -- Put an ear to the ocean and listen carefully, but beware. The water may play tricks on you.

Are you sure you heard a ping from a black box, and if so, where did it come from?

If you're searching for a locator pinger from missing Malaysia Airlines Flight 370, the answers to those questions are crucial to your success at finding it.

The small box may have sunk into mushy silt on the pitch dark floor of the ocean, under nearly three miles of water where the pressure is so great that it can crush a submarine.

So, zero in the source of those pings, if you can. It won't be easy, given the way water behaves in the deep seas.

Anyone who has bobbed up and down in a swimming pool has noticed that things sound different in the water than they do in the air.

Above all, to humans, it's a lot quieter underwater -- nearly silent.

Humans hear sound mainly through the air, according to acoustic researchers from the National Oceanic and Atmospheric Administration. When your ears fill with water, it stops your eardrums from functioning.

But we also hear through our bones, principally our skulls, which prevents us from being completely deaf in the water.

"Bone conductivity is used to hear under water, but it is 40% less effective than air conductivity," NOAA says.

If it's so hard to hear underwater, you might think that sound travels faster and farther in air than in water. The opposite is true, NOAA says.

And researchers have picked up sounds that have traversed a distance through water that would equal a trip from one end of a small country to another, NOAA says.

Some scientists believe that whales can talk to each other through thousands of miles of water.

Their specialized listening devices are technically adept at hearing even faint sounds beneath the waves.

And they can extract mind-boggling information from water sounds: The rumbling of earthquakes an entire ocean away or signs of climate change, NOAA says. The U.S. military can monitor the strategic movements of other navies' submarines.

But that doesn't stop water from throwing nasty acoustic curve balls. Sound underwater often does not travel in a straight line.

Australian authorities have warned about this to temper enthusiasm that a detected ping might point back to the location of a pinger.

"Sound through the water is greatly affected by temperature, pressure and salinity," explained Peter Leavy, commander of the military task force conducting the search. "And that has the effect of attenuating, bending -- sometimes through 90 degrees -- sound waves."

Sound can take squirrely paths, traveling sideways enormous distances through the ocean without coming up near the surface to be heard.

Such dynamics make it necessary for searchers to record multiple pings and compare the data to try to locate the source.

The reason for the sometimes twisty paths lies in how water affects the mechanics of its waves, NOAA says.

Underwater, sound waves can get warped. They curve toward the kinds of water that make them travel more slowly, NOAA says -- toward colder water or into the shallows of less-pressurized water.

Sometimes, sound waves bounce back and forth between two such areas, getting caught up in a "deep sound channel," which carries them sideways for long distances, NOAA says.

High-pitched sounds are less likely to travel far without fading out.

A plane's locator pingers give off very high-pitched sounds in a range over 30,000 Hz. To put that into perspective, the human ear hears sounds up to around 20,000 Hz, NOAA says.

Because of their higher frequency, it would seem pinger sounds from MH370 would have less of a chance of traveling the kinds of distances whale songs do.

Then there is the possibility that other sounds could drown out pings from a black box.

Researchers studying whale calls have complained that it is getting harder to hear them, because the ocean is filling up with sound.

There is a "rising tide of noise from an increasingly urbanizing marine environment, the collective noises from shipping traffic, oil and gas exploration and production, and recreational traffic," researchers from Cornell University have said.

"And every decade the amount of noise is doubling."

The "ocean smog" was strong enough already in 2005 that scientists feared it would keep female whales from hearing the mating calls of males and prevent them from breeding.

The ocean is so full of sound, they wrote, that the area where whales can listen clearly "has shriveled down to a small fraction of what it was less than a century ago."

Australian authorities have worked to reduce ship traffic in the search area to be better able to detect those vital pings.

Paul-Henry Nargeolet has seen the Titanic close up, where it rests 12,500 feet under the sea. And he has taken an underwater expedition to search for wreckage of Air France Flight 447, which plunged into the Atlantic Ocean in 2009.

Experience has taught him to doubt.

"I don't trust very much the acoustic," he says.

The retired French naval commander has undertaken dozens of dives in submersibles to the Titanic to secure its artifacts.

After putting them into baskets, his crew affixed locator pingers to them so he could swing back around to pick them up later, he told CNN's Don Lemon.

Signals believed to come from MH370's pinger in the Indian Ocean could be about 14,000 feet away from the ships listening for them.

Nargeolet doesn't put much trust in the readings searchers have taken.

"It's really hard to find this kind of pinger," he said.

He won't believe that any part of MH370 has been located until someone sees wreckage with their own eyes.