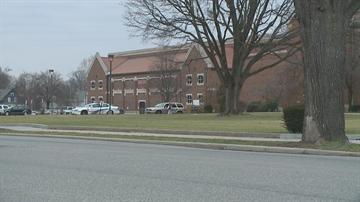 MISHAWAKA, Ind. – The victim’s father said, “Everybody has got their blinders on.” ABC57 News spoke to the man outside his home on Monday off-camera and the station agreed not to use his name or the victim’s.

The boy’s father said he did not want to disclose too much in fear of compromising the investigation, but did want to make one thing clear, “The story is not made up, but the coach's story that he [Darrick Snyder] did not know about it is.”

The victim’s father said one of the suspects is wrestling head coach, Darrick Snyder’s nephew. He said, “That should be a pretty good indication as to why he would cover it up.”

At the time of the alleged sexual assault, his son was 15-years-old, a freshman on the wrestling team at Mishawaka High School.

“Yea, he wrestled JV a couple times; he was on the junior varsity team,” David Truette said the victim quit the team before his sophomore year. A wrestler, Truette graduated from MHS in 2010, the same year the alleged assault occurred.

According to police, the victim was allegedly attacked in early 2010, sometime between January and May. Truette said it happened at a wrestling camp held at the high school for underclassmen. “There were some kids involved in a hazing accident, by the older students, and Darrick Snyder is being held responsible,” Truette said.

Snyder’s nephew was a sophomore on the Junior Varsity team with the victim that year. Truette said, “They knew each other but I don’t think they were like really good friends.”

Truette said, if the coach’s nephew was involved he would have told Snyder about it, “Any like big thing that would hurt the wrestling team, he would tell Snyder and Snyder would try to figure out a way, you know to deal with it.”

Snyder has been suspended with pay from his positions as both teacher and coach at the high school.

There are a total of five suspects, two 15-year-olds, two 16-year-olds, and a 17-year-old. Those are the boys’ ages at the time of the alleged assault. None of their names have been officially released, ABC57 has obtained the suspects’ names but will not release them at this time.

According to the Mishawaka Police Department’s report, the victim was sexually assaulted, described as a strong-arm sodomy with a blunt object such as a club or hammer.

A friend of the victim, Grove said the boy did not go to police, “He didn’t want anyone to know about it, then his girlfriend went and told everyone.” A 15-year-old girl is listed in the police report as an "OP" or "other person"who is not a victim or suspect in the case.

Students said officers picked the victim up from school on Wednesday, when questioned about it the victim, who is now a junior told classmates, “I’m not in trouble, but I don’t want to talk about it.”

Of the five suspects, only one a 17-year-old, who was 15-years-old at the time of the alleged attack has been arrested.

He was taken to the Juvenile Justice Center on Friday, his first court hearing was held on Monday afternoon to determine if the 17-year-old should be detained or released to a parent or guardian. Because the boy is still a minor, few details are available on the case and police cannot comment until official charges have been filed.

As of Monday, the prosecutor has seven business days to file charges, after that, five working days to set a hearing.

According to the prosecutor, even though all of the suspects were minors at the time of the alleged assault, those who are now 18 or older will be charged as adults.

The victim’s father said he does not know which of the five suspects has been arrested; police have not shared that information with the family or given an update on the status of the other four boys.

The case in being handled by the St. Joseph County Special Victim’s Unit, the investigation is ongoing as interviews are still being conducted and information is being collected.