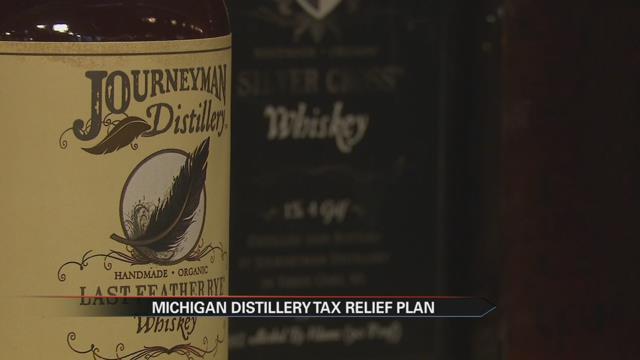 A southwest Michigan lawmaker is hoping to help out local distilleries by getting them a tax cut.

“Our [distillery] taxes are the ninth highest…of 50 states,” Michigan State Senator for the 21st District John Proos said. “While, in fact, our neighbor’s just south – Indiana – is the 42nd most taxed when it comes to distilled spirits.”

Proos is hoping those numbers will help bring change to the state’s tax regulations for distilleries.

He is sponsoring Senate Bill 448, which just passed in the Michigan State Senate and is heading to the house for a vote.

It would help out small-town distilleries by taxing them far less for every bottle of liquor they sell.

“I know if I opened a distillery today, it would be in Indiana. It wouldn’t be in Michigan,” Bill Welter, owner of Journeyman Distillery in Three Oaks, said.

Welter opened his business in 2011 and is happy with how much it’s grown in five short years, but Michigan’s tax on bottles of liquor being sold really eats into his profit margin.

But in nearby Indiana, “The tax on the same bottle of whiskey would be roughly 50 cents,” Welter said. “We’re paying over $15 a bottle here in Michigan.”

Current Michigan law calls for a 65-percent tax on a bottle of spirits.

The new law would drop that number to 20-percent for small distilleries – which would be businesses that produce less than 60,000 gallons of spirits annually.

Journeyman Distillery falls under that category.

Proos said the new law would help smaller distilleries like it become sustainable so they can expand over time.

Welter said the lower tax rate would give him more resources to grow his business and invest more into the community.

“I think we can generate a lot more job growth,” Welter said. “I think we could make a real difference in Michigan. But it all costs money.”

The bill passed in the state senate in a 36 to 1 vote, and is now headed to the state house.

Michigan has already passed similar laws for breweries and wineries, but distilleries have, so far, been left behind.

Welter said he’s hoping the bill will become law because he’s looking to expand his business more, but he said that expansion may have to be in Indiana if the taxes don’t get cheaper in Michigan.