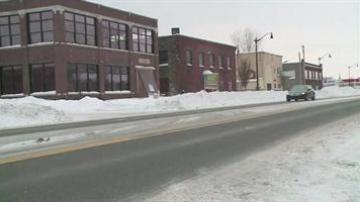 BENTON HARBOR, Mich.-- Benton Harbor is just days away from stepping out of a financial emergency. Emergency manager Tony Saunders will be leaving because the city’s deficit will be eliminated.

In February of last year it was projected that Benton Harbor’s deficit would increase to $3 million by this time, but instead they’ve paid back $1.5 million of their debt.

On Thursday Tony Saunders appointed Darwin Watson as the new City Manager of Benton Harbor. Watson has worked with the city since 2005 and he has big goals for 2014.

Watson said, “Meetings with the finance director to make sure we stay within budget, looking at possible ways to generate new revenue, and also to look at ways to retain and expand the current businesses we have here.”

According to Benton Harbor's Mayor, the city's debt will be absorbed in their yearly budget.

James Hightower said, “Ending this fiscal year of 2013 in June we’ve projected that we will end the year $1.3 to $1.6 million in the black and that’s a plus for the city. We haven’t seen that in a long time.”

The consolidation loan will be at a 2.8-percent interest rate which is a fantastic deal according to Hightower.

Hightower said, “We’re also working with our vendors to get a 30-percent discount or decrease in payment so they can get them right away. That’s going to put the city in a much better position than we were if we were trying to pay each of these vendors off over time.”

Many skeptics wonder if the city will fall back into old patterns. However, Hightower is optimistic about the city's future.

Hightower said, “To go from zero money in the bank to having a surplus of a million dollars at the end of the year, I think we are in real good shape.”

Hightower and Watson both hope that with better financial footing they will be able to attract more businesses and repair city infrastructure.

Saunders also brought back the Assistant City Manager position which will be filled by a woman coming from Detroit.

Watson hopes to keep the city's budget intact and focus on job creation.

Watson said, “To keep moving the ship forward. And we are on a great course to make sure Benton Harbor becomes, or is restored to, the metropolis in Southwest Michigan it was prior.”