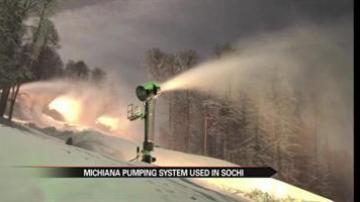 MILFORD, Ind. -- Temperatures in Sochi Russia at the Winter Olympics are in the 50s and 60s. How are they getting all of the snow on the ground for the skiing and snowboarding events? They're using a pumping system designed and built in Michiana.

A company called Torrent Engineering and Equipment got the bid for the big job.

The owners say they did some work for the Vancouver Olympics in 2010 and made a few valuable contacts who called them up for the job in Sochi-the largest project in the company's 13 year history.

Moving water more than 4800 feet straight up-and then shooting it out of a snow gun up top is an incredible feat.

But it's just a normal day at the office for Mark Meadows and Joe Cousins -  co-owners of  Torrent Engineering and Equipment.

"I started at Mt. Wawasee making snow and when I told my folks after college that I wanted to go off and work in the ski business, they thought I was nuts," said Cousins.

The two came together almost 14 years ago to design and build large pumping systems.

"Part of that is resort work with ski areas and we do it for artificial snow making systems, so we do engineering design and then we build equipment," said Meadows.

With the temperatures in Sochi at 60-degrees, the technology is critical to Olympic athletes.

"It's great because the place probably wouldn't have any snow right now if it wasn't for this system and the system buried the place, so they're not going to run out of snow. It might be a little mushy but there's lots of snow there," said Cousins.

The Olympic snow making machine was built on a farm near Milford where cousins grew up.

"It's very satisfying to be here where I grew up doing it," said Cousins.