Michiana deals with effects of another winter storm 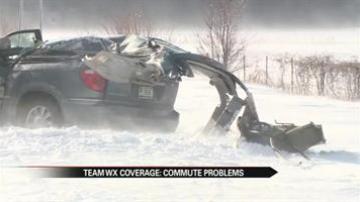 Snow, ice, and low visibility resulted in a collision between a minivan and plow truck Wednesday afternoon on State Road 2 in New Carlisle.

The driver of the van was taken to the hospital.

Drivers not far from where that accident happened say everyone needs to be patient or things will just get worse.

“The roads are slippery. They’re icy, and you kind of have to take your time,” Nancy Kabui says.

In Marshall County residents had to deal with power outages. At one point more than 3,000 customers were without power.

The snow knocked out 4 substations where power is distributed.