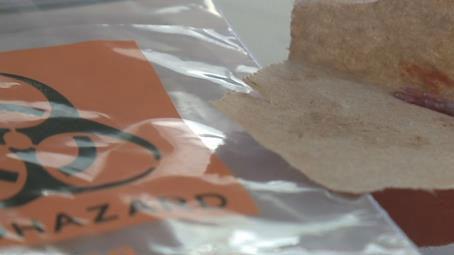 A Michiana mom and her daughter say they went out Sunday evening for ice cream and ended up with a cringe worthy topping - mouse pieces.

“She actually swallowed some of this piece- I don’t know I just ate the ice cream she actually had this in her mouth and swallowed it,” Arkeena Smith.

Smith says her 12-year-old daughter Danijha Smith found what they say is a mouse leg, in a scoop of ice cream they got from the Oak Dairy Party store in Niles.

“For a minute I was like it was probably just the cookie dough and ice or something and then I was like I can’t this is too hard so I took it out and was like mom what is this?” Danijha said.

Danijha showed her mom what seems to be the severed extremities of a mouse.

“It’s on a spoon and the only thing I can do is just scream,” Arkeena said.

“I couldn’t do nothing but keep gagging and throwing up,” Danijha said.

Arkeena rushed her daughter to Memorial Hospital in South Bend where they prescribed an antibiotic.

“There is no telling how many people went there yesterday because this is a popular place. People go there on Sunday and a lot of people buy ice cream,” Arkeena said.

Arkeena called the Michigan Department of Agriculture to file a complaint.

The department began its own investigation on Wednesday.

“We don’t know how that particular mouse got into the product at this point - but what we will do is working really hard with the store to make sure they are adhering to food safety," said Jennifer Holton, Communications Director, Michigan Department of Agriculture and Rural Development.

Holton says the investigation can take up to two weeks.

“We’re not going to be able to solve this riddle in 24 hours or less. It could have gotten in any number of ways. We will look at whether or not there was a crack in the wall maybe it came in that way," said Holton.

The smiths say they’re traumatized because it ruined their favorite dessert.

“I don’t know if I would ever like to eat ice cream again, I will always remember it’s just yuck," said Danijha.

On Monday, we spoke with the store manager. She said she was injured and wasn't in the store on Sunday, She did not want to comment on the Smith's complaint.