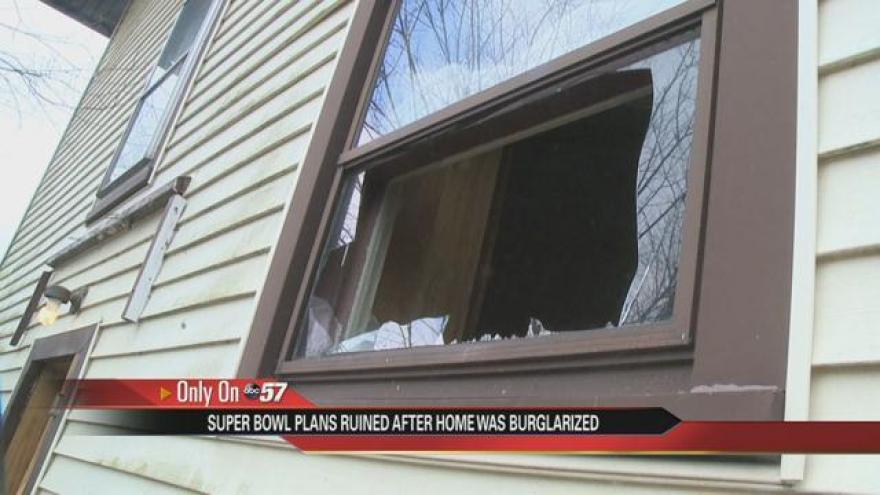 One Michiana family’s Super Bowl plans were ruined after someone burglarized their home and left it in shambles. The burglars left the home, on 36th Street and Wall Street, with TV’s, jewelry, and video games; stealing nearly $2,500 worth of goods.

The family says they had a get together planned out, like most families do super bowl weekend, but that all changed.

“It definitely ruins watching TV on my 65 inch TV. I was ready to just watch the greatest game of the year on with my son and his mother and some friends,” said Andres Botello, owner of the home and a big Falcons fan.

Botello got home around 7 p.m. on Saturday. He walked into his home to see broken glass, and to find the 65 inch TV he was going to watch the Super Bowl on gone.

“As I walked into the house immediately the house was just in disarray, pillow cushions everywhere. I work hard to try to have nice things for me and my son and they were just gone so quick,” he said.

Botello had a family gathering planned for Sunday night, but the people that stole his belongings ruined it.

They also left with a 55 inch TV that was placed underneath the bigger one. The burglars even went through his 10-year-old’s belongings.

“It’s very frustrating. They had stolen his video games and his necklace, just disappointing,” said Botello.

Botello suspects they entered through his backyard fence because it was partially pulled apart, but at this point he’s just glad everyone is safe.

To alert his community, he posted a message on The River Park Neighborhood Facebook page.

“I knew right away if anybody did see something they would say something if they did. A lot of people didn’t see much but it was nice to see people reach out.”

Some neighbors told him two vehicles, including a blue truck and a gray car, sped off quickly around the time of the burglary. “That’s the biggest clue I have so far,” he said.

His message to the community is to make sure they work together to build a better River Park neighborhood.

“Be aware of your surroundings. Try to communicate with your neighbors more and try to develop that relationship with that because we’ve don’t have that anymore.”