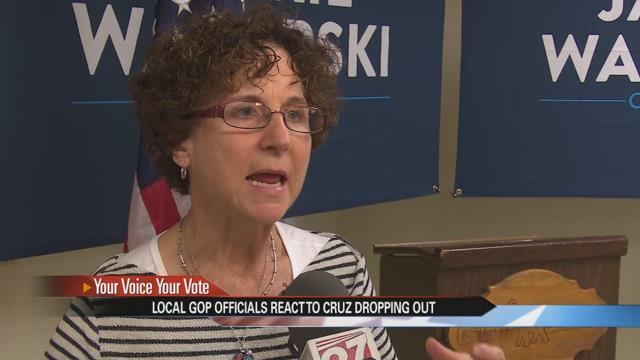 Congresswoman Jackie Walorski stopped by the headquarters to thank her supporters after winning her primary contest, right before significant news about the presidential race broke.

“I think [Cruz] had a tendency not to connect with a certain segment of the population,” St. Joesph County Republican Vice Chair Lynn Fitzpatrick said. “He just didn’t quite reach them, and I think their perception of him was probably a little bit twisted because of, just the veracity of the campaign, it was very, very negative.”

Fitzpatrick added: “There’s a small segment of the Republican membership that will perhaps never vote for Trump, just a small amount. But, what you see now, is that people will accept the inevitable.”

“What I do anticipate is actually seeing some Bernie [Sanders] supporters come over and actually end up supporting Trump [if Hillary Clinton becomes the Democratic nominee],” Saenz said.

Both Saenz and Fitzpatrick said they are encouraged Michiana Republicans will support Trump if he becomes their party’s nominee.

“We will back our nominee for the Republican Party, yes we will,” Fitzpatrick said.

Earlier in the evening, Walorski was asked if she was ready to support Trump as her party’s nominee, and possibly president.

“I’m ready to get behind any president that is going to be the commander-in-chief, which we haven’t had for eight years,” Walorski said. “Anybody that’s willing to stay in that office, we’re going to work with them.”