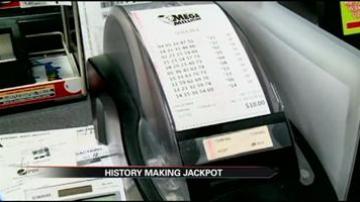 SOUTH BEND, Ind -- The winning numbers for the second largest lottery jackpot in U.S. history were drawn Tuesday night, as Michiana locals waited to see if they held the lucky ticket.

And even though chances of winning the Mega Millions are 1 out of 259 million, that didn't stop Michiana locals from hoping they had the lucky ticket.

One Michiana man, Greg Langel, has some experience with winning lotteries.

He turned some pocket change into life changing money, after he won a million dollars off a scratch off ticket just over a year ago.

"You really don't think it's going to happen to you, and then it does," says Langel.  "Whatever the size of the jackpot is, you're just thrilled and you just can't believe it actually happened to you."