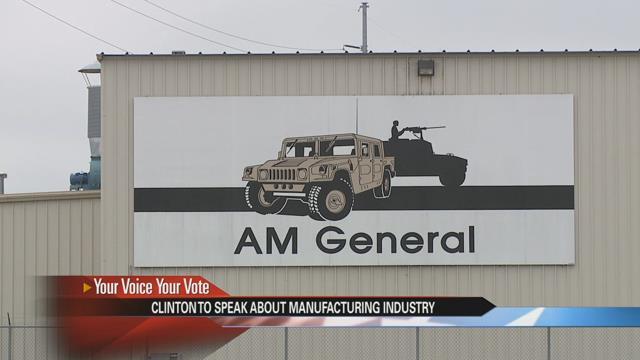 It’s been a roller coaster ride of sorts for the manufacturing industry in northern Indiana.

Bureau of Labor statistics show that in the South Bend and Mishawaka region, the number of manufacturing jobs dropped from nearly 25,000 in the year 2000, to now 17,000 in 2016.

But manufacturing remains a key component to Indiana’s success, keeping more than 500,000 people employed across the Hoosier state.

Hillary Clinton’s visit to Mishawaka’s AM General plant Tuesday represented a type of rebirth for the local employer.

The company’s website says it has more than 1,500 employees, many working on the front lines of a booming Mercedes-Benz production, along with the company’s signature military vehicles – the Humvee was born here – and a unique handicap-accessible car called the MV-1.

But times were tough in recent years.

In an August 2015 New York Times report, AM General’s head of commercial manufacturing detailed the impact the recession had on the company.

“We went from having about 1,000 workers in the plant down to just about zero,” David Whitby said.

Clinton’s stop at AM General highlights the importance of American jobs in this election. She’s working to convince voters that her previous support of international trade deals – like the North American Free Trade Agreement (NAFTA) and the Trans-Pacific Partnership (TPP) – will not negatively impact a Clinton presidency.

AM General officials declined an interview request about Clinton’s visit and how business is doing, but you can find full coverage of the afternoon here.