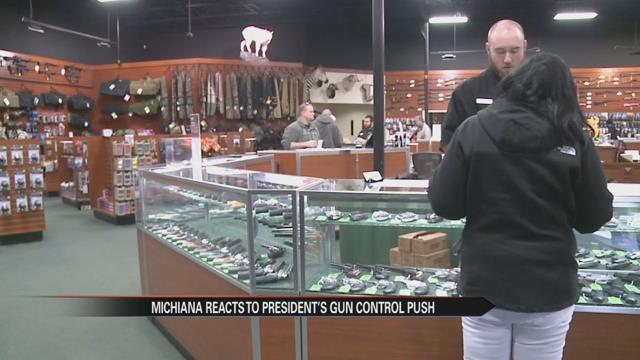 President Barack Obama’s executive order on gun control has everyone from gun shop owners to police to community organizers talking.

In Michiana some have different opinions but agree on one thing. They hope guns stay out of the wrong hands.

“I have attended more funerals for children who have died from gun violence in the city than I really care to recall,” says Jason Moreno, a Community Organizer in south central Elkhart.

Moreno says he has shown up to too many crime scenes and has been waiting for something to be done.

“I’m looking forward to someone tweaking the formula a little bit and at least trying to attempt something to remedy the situation,” says Moreno.

On Tuesday President Obama announced his executive order on gun control. The order calls for stricter background checks and guidelines on those who sell guns.

“We are interested in keeping fire arms out of the hands of people who should not have them. We follow all guidelines for background checks as it is so we don’t see a direct effect on us,” says Brad Rupert, General Manager of Midwest Gun Exchange.

Rupert says he tuned in to the press conference expecting to get more specifics. But he was able to talk to the current details of the background checks he and all licensed dealers run.

He said it isn’t 100 percent secure when it comes to reporting mental illnesses.

“If a person answers honestly you would catch people who have one. If they answer dishonestly it’s hard to catch those individuals,” says Rupert.

After hearing the executive order, Elkhart Police bring up another issue they say is hard to control.

“A lot of the guns we recover in Elkhart whether they were used in a crime or other means those guns a lot of the times are stolen,” says Sergeant Chris Snyder with the Elkhart Police Department.

Sergeant Snyder says he hopes the specifics of the executive actions protect the citizens without being overly restrictive.

“Make sure that what we are doing is best for everybody and we are not being too restrictive so that those that want to responsibly possess guns can possess guns,” says Sergeant Snyder.

Even without the details Moreno says something is better than nothing.

“We have been dealing with nothing for far too long in terms of attempting to legislate the purchase and transferring of guns,” says Moreno.