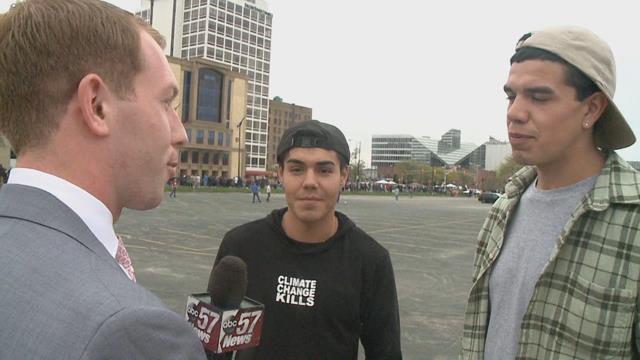 As thousands waited for Bernie Sanders’ South Bend rally Sunday, some Michiana voters reflected on how rare it is for Hoosier primary votes to matter this much.

Downtown South Bend has become a political hot spot, hosting three of the five presidential candidates in the week leading up to Tuesday’s primary.

“I came out here today because I have never had such excitement for a candidate,” Mandy Leazenby, who was waiting in line, said. “Bernie Sanders has my best interests in mind and I think he has the majority’s best interest in mind.”

“I think it’s great,” Joe Williams, who was also waiting in line, said. “It goes back to the same as it did in 2008 with President Obama and Hillary Clinton, so Indiana’s not just fly-over country, but something that matters.”

And this year, there is a big focus on younger voters – many lining up Sunday to see Sanders for themselves.

“It’s a pretty amazing experience to be part of history right now, especially getting a chance to vote for Bernie Sanders in these primaries coming up in Indiana,” first-time voter Edward Jarrett Montano said.

“We know that’s he’s an honest politician, which is really rare to find nowadays,” first-time voter Luis Mejia said. “We know that he’s gonna do what’s right for us, the common folk, not just those on Wall Street. That’s what really brings us out here right now.”

The Century Center filled up Sunday afternoon, serving as a visual for just how important Indiana’s primary has become.