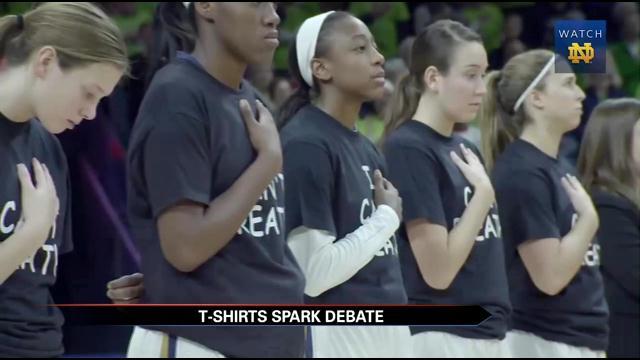 The Fighting Irish women's basketball team made a bold statement over the weekend. Now, it has everyone in the community buzzing about whether the team's actions were appropriate.

Comments from our viewers are filling the ABC 57 News Facebook page after the Notre Dame women's basketball team took to the court in shirts that read "I can't breathe" Saturday, in support of Eric Garner, the New York man who died after a police officer held him in a choke hold.

That officer was not indicted by a grand jury.

“The reaction would be exactly what I would have predicted it to be. You will have a group of individuals who will find that offensive, particularly the timing of it,” Bethel College Assistant Professor of Criminal Justice Tom LaFountain.

Some would say the stance had poor timing, as Saturday was the 11th anniversary of the deaths of Mishawaka police officers Thomas Roberts and Bryan Verkler, who were shot and killed in the line of duty.

“You have to get past that I think and try to realize what these girls were trying say, that here's a community that appears to be targeted and we're giving them our support,” LaFountain said.

But not everyone is against the Lady Irish taking a stand. We found quite a few comments on our page in support of the women.

Perhaps the biggest supporter of these student athletes is their head coach Muffet McGraw.

"Hopefully something that will catch fire and something that people across the country will start to think about and be willing to look in the mirror and ask themselves, what are you willing to fight for?” McGraw said.

No matter where you fall on the divided spectrum of this hot-button issue, social experts say in order to find a solution, we need to work to find a middle ground.

“The best solution? Cooler heads to prevail. People in leadership roles in both communities have to come together,” LaFountain said.
Share this article: