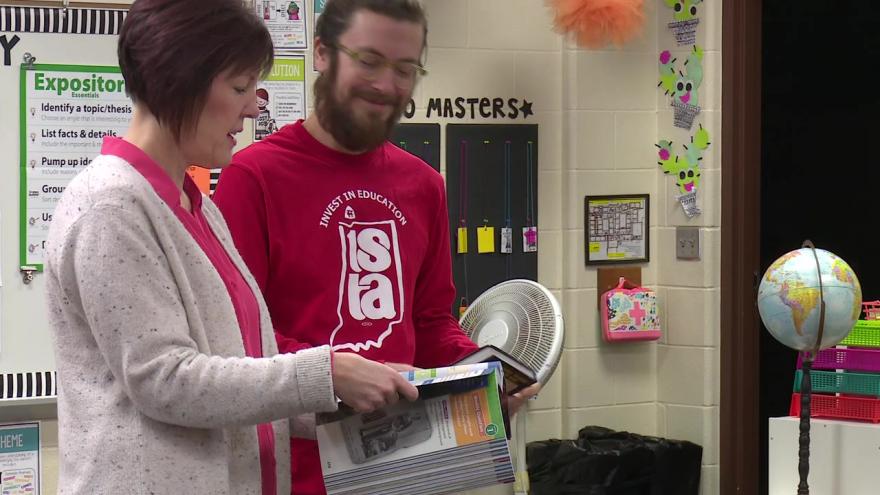 Kinder began teaching seven years ago to help build up his community, but he lists low pay and unrealistic state standards as reasons why he and his colleagues have either left the profession or considered it.

“No one is happy to leave this job,” said Kinder. “It’s often a calling and so to feel yourself in a place where you can’t do this anymore, I need a break, it’s a really difficult thing.”

However, Kinder wants to continue to help Elkhart’s future, so he is rallying Tuesday alongside and expected 16,000 other educators and community members at the statehouse in Indianapolis for Red for Ed Action Day.

“Invest in education,” said Kinder. “I think that, by far is the number one thing lawmakers can do.”

Tuesday is the start of the 2020 legislative session in Indiana.

Lawmakers will be organizing for the upcoming general assembly, so teachers hope legislators put their demands at the forefront of this year’s agenda.

“I hope our legislators recognize this as a sign that we’re at a tipping point,” said Riverview Elementary Reading Specialist and Elkhart Teachers Association President Kerry Mullet.

The Indiana State Teachers Association says at least 145 school districts have decided to close Tuesday so teachers can attend.

“When you have that many people traveling to Indianapolis at their own expense, using gas money, paying for expensive parking, battling the crowds, to speak out to their legislators, saying, “Hey we’re trying to get a message to you,’ I hope they recognize that,” said Mullet.

Mullet explains educators and the ISTA want the state to increase their pay.

A report from the Nelson A. Rockefeller Institute of Government released in April ranked Indiana last of the 50 states and the District of Columbia for increases in teacher pay between 2002 and 2017.

ISTA believes the Indiana’s $2 billion budget surplus could be used to increase base salaries for teachers.

The state did provide a historic $763 million in new money for K-12 education this past year. It did not directly carve out money for raises, but the funding did provide $37 million in teacher appreciation grants.

“By not investing as much as they’d like in public education, lawmakers have really communicated to children in Indiana that they don’t believe these kids deserve the best,” said Kinder.

Roughly 500,000 Indiana students in grades 3-8 took the new I-LEARN test this spring after the Republican-dominated Legislature ordered it in 2017 as a replacement for the widely criticized I-STEP exams. I-LEARN scores were lower when compared to previous I-STEP results.

ISTA says holding teachers and schools harmless for poor I-LEARN results should not only include letter grades for schools and teacher evaluations, but also for school intervention and state takeovers of schools.

Holcomb did release a statement in August urging lawmakers not to penalize districts for test results.

ISTA explains changes under HEA 1002 in 2018 requires teachers in traditional public schools using a PGP for renewing their license to complete 15 of the 90 PGP points in one or more of a series of program options focused on career navigation or economic development.

ISTA argues the new requirement places an undue burden on teachers and is misplaced in its implementation.

“It’s become more challenging and difficult to meet the needs of students, to teach to my full capacity and not get completely frustrated,” said Mullet.

Both Mullet and Kinder say only time will tell; they’re cautiously optimistic lawmakers will listen to them but they hope Tuesday’s unified message pushes lawmakers to create change for teachers and students in the Hoosier state.

“If teachers feel like they’re losing, communities lose, students lose,” said Kinder. “So, we’re going to show up on Tuesday, hopefully to communicate some of that energy that we have.”

Tuesday’s rally is happening from 9 a.m. to 3 p.m. at the Indiana Statehouse.