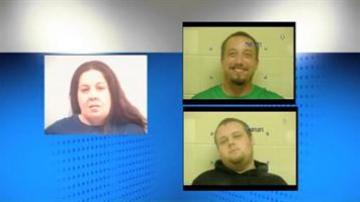 ST. JOSEPH COUNTY, Ind.-- An elaborate crime spree across four states came to an end in Tennessee. Police said the three people behind it were all from Michiana.

Larry Lynn Worsham, Gladys Wagaman, and Charles Edward Wolfe were caught at a motel in Manchester, Tennessee. The trio is wanted in 12 different jurisdictions for illegal activity.

Wagaman told police the majority of the items stolen are from Indiana and Michigan.

According to Wagaman's statement to police, Wolfe would shoot out car windows to steal purses, and then they would use the stolen credit cards to buy electronics.

Wagaman is already back in the Elkhart County Jail booked on theft charges. She gave police access to their Craigslist account where her husband, Worsham, was allegedly selling her for sex online.

Worsham and Wolfe are booked in the Coffee County Jail where they face theft, fraud, and drug charges.