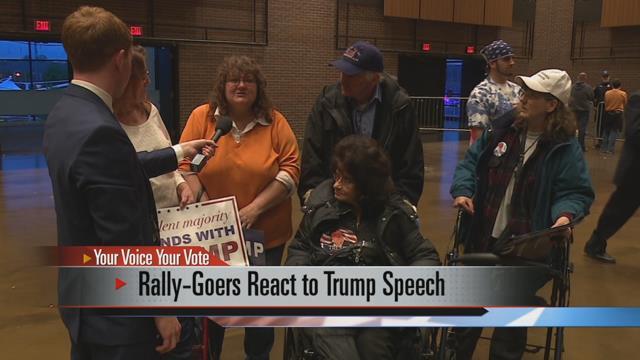 Donald Trump’s Michiana supporters were pleased with what the Republican frontrunner said to them during his South Bend rally.

“[It was] awesome!” one female Trump supporter said. “I like that he’s a straight-talker.”

“I pretty much liked all of it,” another female Trump supporter said. “I liked that he’s gonna stop the trade and have the jobs stay here; that he’s going to fix Obamacare.”

Trump touched on a number of issues during the speech, but he consistently reminded his supporters how important it is to vote in Tuesday’s Indiana primary.

His supporters loved every minute of the evening.

“[If I was] an American, I would feel very patriotic to what’s said because [Trump is] putting America first,” a male Trump supporter, who traveled from Indonesia to hear him speak in South Bend, said.

“I think coming to see Donald Trump was a great experience!” another male Trump supporter said.

Many supporters said they felt Trump’s speech focused on putting America first and uniting the country by being strong – something many of them were looking forward to hearing.