Michiana weighs in on continuing shutdown 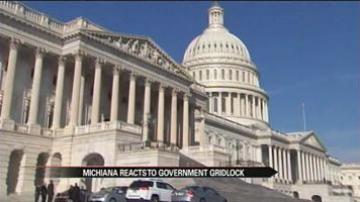 SOUTH BEND, Ind.--Seventy-four perfect of Americans disapprove of the way Republicans in Congress are handling the budget crisis according to the latest ABC Washington poll. But some people here in Michiana say they don't even care about political parties, they just want a solution.

One woman says she's just going to ignore it and hope she wakes up one morning to good news.

"I guess so which is kind of hopeful but the way things are going it may not happen soon,” said Erica Richey, mother from South Bend.

Earlier today, it seemed the House could possibly come to an agreement. The bill would allow the treasury to borrow money normally until February and reopen the government until December 15th, but the bill lost steam throughout the day.

"Frustration with the whole situation,” said Richey. “I've kind of washed my hands of it and I just wish a decision would be made one way or the other.”

Outside the Capital chambers, places like Indiana Dunes National lakeshore remain closed, upsetting one ten-year-old boy who says he can't even vote yet.

“We are going to be going on a hike for  Boy Scouts and if the government isn't started up by Saturday, we can't go,” said Nathan Six.

And as far as this ten-year-old is concerned, Congress can take a hike, since it's looking like he's not getting his hiking badge anytime soon.