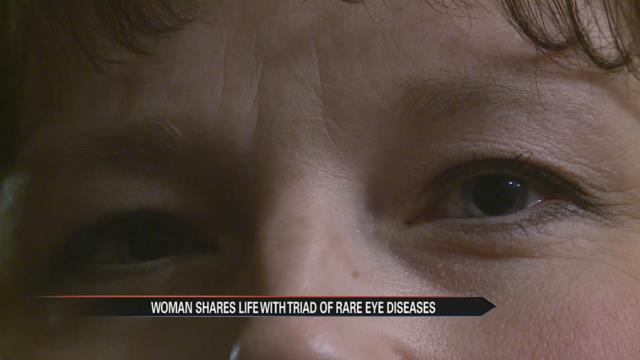 The last day of February is Rare Disease Day.  This day brings awareness to the public about rare diseases and how it impacts people.  A rare disease is a disease that affects less than 200,000 people in America.

These are three rare eye diseases that have taken 97 percent of Renée Sagarsee’s vision. She is one of thirteen people in the world who have all three of these diseases.

The symptoms first started in April of 2011 while she was at work.

“I felt very off balanced and it was giving me a headache really quick and I covered my eyes and rubbed them.  I uncovered my left eye and it was fine.  I uncovered my right eye and it was completely blind," said Renée.  "No warning whatsoever.  Of course it frightened me.  I ran downstairs to my boss and said 'oh my gosh I can't see out of my right eye.'  That lasted for three hours that day.  As I was driving to an eye doctor's office to be checked out the vision started coming back. By the time i had gotten in to see him, the vision had returned.  And then it happened again two days later, and again the following day, and i just kept losing my vision and then three or four hours later it would come back."

Renée says that some of the symptoms would come and go and would sometimes even be different.

"It seemed week after week the symptoms changed," said Renée .  "It took nearly two years to be diagnosed."

After 13 different doctors, six cities, and four states, she was finally diagnosed in October of 2013.

"My left eye, is 97 percent blind, I just have a very small amount of vision," Renée said. "It’s pretty round.  It’s kind of like a pencil point vision.  It can be fairly clear sometimes and other times I can’t distinguish anything. I'm not able to make out any details of anyone's face, I can't see anyone's eyes, any features whatsoever, just the outline of people."

As anyone can imagine, adjusting to these changes was hard for her and her family.

“It created a lot of stress for them, a lot of fear.  What’s going to happen when you go blind?  How are you going to function?  Are you going to be ok at home all by yourself?” Renée said.

Renée says that it took her about ten months to learn how to walk with a cane and be independent.  She was trained in places such as her home, her kid’s school and even the grocery store.

"This woman is more amazing than what she credits herself for," said Bradford Sagarsee. “I’ve seen her walk into an unfamiliar area, stop at the doorway, use what tiny little vision she has, memorize the room, and then walk through as if she had full vision.  And it is just phenomenal that she does that.”

Her husband Bradford says that it has been a challenge being the sole breadwinner and caretaker for his wife and kids.

“The greatest thing about this is that it brought us so close together that we feel we can accomplish anything, we can overcome any challenge as long as we’re together.” Bradford said.

Renee has low vision aids such as the PenFriend that help her continue doing daily tasks around the home such as laundry and cooking.

"Recorded stickers, that are labels on shirts that tell me who shirt it is and what color it is,” Renée said.

"I was very fortunate that I was able to find Facebook support pages for each of those diseases," said Renée .  "I did get a lot of support in the beginning, that was wonderful to be able to find other people that have the diseases and actually know what you're going through and feel the same problems and feel the same way.  In the beginning it was great support for me and now I tend to be the one giving the support, doing real well coping with everything."

Right now there’s no cure for any of Renee’s eye diseases.

“I have a huge amount of faith," said Renée.  "We pray a lot.  I know the Lord got this taken care of and so I don’t worry about it.  I just do the best I can every single day, take care of myself, take care of my family, and thank God for everyday that I do get to see.”