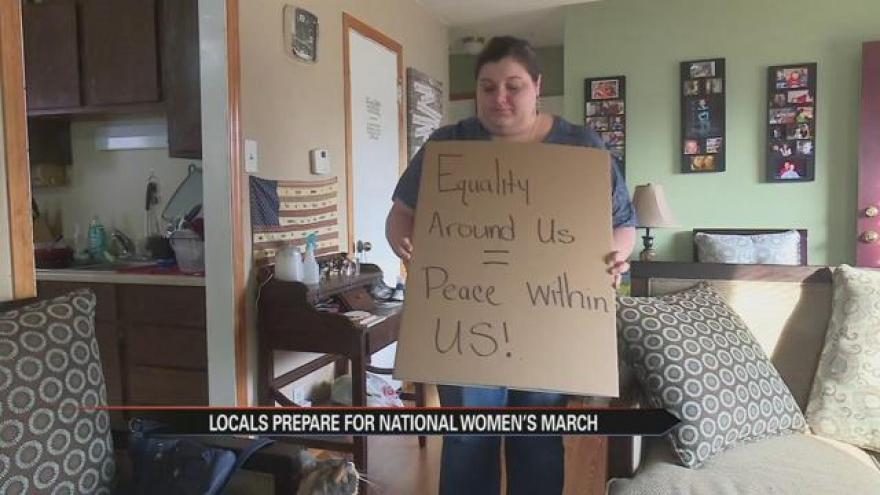 The country is counting down the days until President-Elect Donald Trump's inauguration on Jan 20.  But for some, the countdown is for the day after the inauguration, when thousands of women, and men, will march on Washington to voice their opinions on women's rights.

Although the biggest women's march will be in D.C., on the same day, hundreds of "sister marches" will be held throughout the country.  South Bend's march will start at the Jon Hunt Memorial Plaza on Saturday at 3:30 p.m.

But for the local Hoosiers heading to D.C., this is a push for equality.

"There's a lot of different people on the spectrum coming together for this, which is what I think is amazing," says Mishawaka resident Tiffany Klemm. On Saturday, she'll be joining the thousands marching to keep what they say, are their innate rights.

She's not the only one from the Michiana area who feel the same way.

"There's at least six busses from Michiana alone," explains Klemm.  "Our bus is completely full, with 57 people on it."

And she's proud to be joining forces with others.

"Knowing that I'm going to be amongst people with similar beliefs," says Klemm. "We don;t want our rights being taken away, we want our voices to be heard, and we don't want the last 60 years to be done."

Klemm is referring to talks from politicians, alluding to changes that could happen to current policies regarding reproductive rights.

But she says, the blame does not lie with just one person.

"It's not all about Trump," says Klemm. "The president doesn't hold all of the power. We need to hold every politician accountable for the policies they are trying to enact, and the freedoms they're trying to take away."

She adds that the Women's March on Washington is not an Anti-Trump rally.

"I think it's our duty as an American, as a patriot that you need to stand behind your Commander-in-Chief," Klemm explains. "He is holding the highest office in our country, and one of the highest offices in the world."

But she does feel things need to be done.

And on Martin Luther King Day Weekend, the women marching have honored his memory, by naming the march after his own, with a blessing from his daughter.

"He was able to get and motivate people to march on Washington in the 60s," adds Klemm. "So this is kind of in honor of that."

Klemm says the timing of this march is ironic, because less than 100 years ago, women marched on Washington to gain the right to vote.  And now, they will be marching to protect the rights of their bodies.