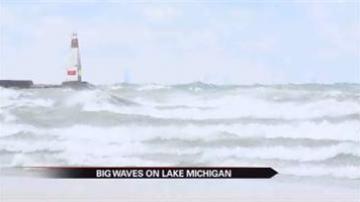 MICHIGAN CITY, Ind. -- Waves along Lake Michigan came crashing in against the shoreline of Michigan City.

And strong gusts of wind caused sand to rip through Washington Park.

But despite the extreme conditions, weather buffs like Bob Stallsmith braved the elements for an incredible view.

He and others wanted to see the effects of Sandy for themselves.

And while the waves were several feet high, folks said it could be a lot worse.

"I feel sorry for the people out on the East Coast," said Vince Forestieri, a beachgoer. "I mean, if we're getting hammered with this, I can imagine what they're getting out there."

He and his wife made the trek to Michigan City from Prarie.

The sights were nice to look at, but Monday's weather wasn't the sole reason they decided to visit.

"It was a year ago this month that I proposed to her out here at the lighthouse," said Forestieri. "It was just kind of a nostalgic type thing."

City sand movers tried to keep up to prevent erosion, but in the end, Mother Nature was just too much to handle.

But still, people found a way to get in.

"The sand gets in your eyes," said Stallsmith. "But if you're really interested in weather or seeing something that you've never seen before, I'd recommend you come down."