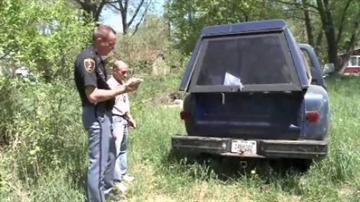 During the sweep, code enforcement and local leaders will not only look for violations, they will be working with homeowners to address them.

"The enforcement sweep is doing justice for the town,” said homeowner Herb Block.

Instead of tackling the whole city at once, Mayor Ron Meer has targeted the Eastport neighborhood first.

"The resources are concentrated. Also it makes it a little more personal. The police officers, myself, are having conversations with the homeowners,” said Meer.

The conversations are paying off.

A lot owned by 79-year-old General Garner used to be cluttered with junk.

"He would bring in stuff that he found in alleys or at other garage sales, and it just grew into what he called Garner's Park,” said Sergeant Chris Yagelski of the Michigan City Police Department.

"As of now, the past eight years or so, I wasn't doing nothing with that no way, because I am too old for that not,” said Garner.

He came to an agreement with michigan city to allow them onto his property to remove the eyesore as part of a massive code enforcement sweep.

"Everybody came, they said, 'Why are they doing that?' I said, 'Don't ask no questions.’ I'm happy. That's the main thing. The city is happy getting all this cleaned up. That's beautiful."

Meer says every neighborhood will eventually be addressed.