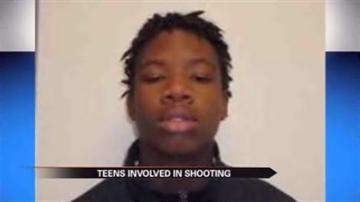 MICHIGAN CITY, Ind. -- Police say an armed teenager is still on the loose and need your help catching him. Michigan City Police responded to shots fired Friday night in the 600 block of Main Street. When they arrived on scene, they found two teenagers with bullet wounds in a nearby alleyway.

Michigan City homeowners are used to horns, but lately, they've been hearing a lot more than trains.

Police responded to shots fired in the 600 block of Main Street Friday night just before 8 pm. Neighbors said they heard yelling, and then multipe shots.

Two teenagers were shot and left in a nearby alleyway. They were later transported to St. Anthony's Hospital in Michigan City where their injuries appear to be non life-threatening.

He worries about potential innocent bystanders, and said something needs to be done about youth violence before it's too late.

"I think it's time for the different neighborhoods of our community to start standing up and saying that we're not going to tolerate this any longer," Harris said.

Right now -- police are on the lookout for 16-year-old Asa Tompkins. They said he may be the one responsible for shooting the two teens during Friday night's confrontation.

Any crime involving a firearm is troubling, but neighbors said when it involves a kid, it always hits closer to home.

"The youth is our future, and if this is the future of Michigan City, I'm very, very concerned," Harris said.

"Hopefully, this will be a wakeup call for some of these kids out here that are misguided," Benning Jr. said. "The threat of jail should be enough for them to stop doing this."