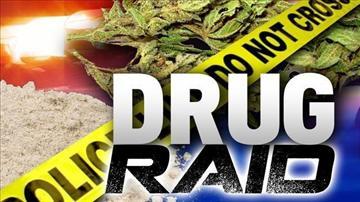 Police said they received anonymous tips that people were selling drugs at 218 Hobart Street. Undercover officers from the Street Crimes Unit then went to the home and attempted to buy drugs.

On Tuesday at 4:30 p.m., police obtained a search warrant. Michigan City police SWAT entered the home and detained five people. During the first search, police found a handgun under a couch. Police also said that $900 was seized from drug dealers at the home.

Police continued searching the house. They found another handgun, cocaine, marijuana, scales, and other drug paraphernalia that was collected as evidence.

Police arrested three siblings, all on charges of Dealing Cocaine, a Class A Felony. 20-year-old Julian Mojiac was charged with two counts. 24-year-old Jahida Mojiac and 22-year-old Mario Mojiac are each facing one count.

"The Street Crimes Unit recognizes that drug dealing and drug abuse in all communities will never be completely eliminated; however, our unit will continue to take a very aggressive and proactive approach in apprehending drug dealers to hold them accountable for their actions in our community," said Michigan City Police Street Crimes Unit.

Police encourage the community to report any suspected drug dealing through the drug tip hot-line: (219) 873-1488.