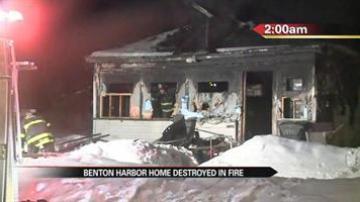 BENTON HARBOR, Mich. -- A couple is left homeless Monday after an early morning fire broke out in their home, destroying the house and all its contents. Flames began just after midnight at 1038 Superior Street in Benton Harbor, Michigan.

The couple didn't get injured in the fire, the husband wasn't home and the wife woke up in time to evacuate.

She tells fire crews that she slept through her smoke alarm, but was awakened by her neighbor's persistent banging on the front door.

Benton Harbor's Fire Services Department called in every one of their firefighters and enlisted extra assistance from the St. Joseph Fire Department.

Crews say fatigue was a big factor while fighting the flames, after several of the men had just finished fighting a fire that lasted for 14 hours the day before.

Firefighters had to tap into a fire hydrant about a block away because they needed additional water to put out the flames.

"It's pretty shocking because of how the flames took the house over so fast," said Cory Willis, a man who lives just across the street from the home. "I didn't know fires moved that fast. Within a minute, it was coming out of the back window and then it was right there at the front door."

The cause of the fire is still undetermined, although firefighters suspect it may have started in the kitchen after the homeowner told them she'd left the stove on overnight to heat the home.

"It's not a matter of if, but when you'll start a fire if you leave your stove on," said Jeremy Connell, Deputy Director of Benton Harbor Fire Services.