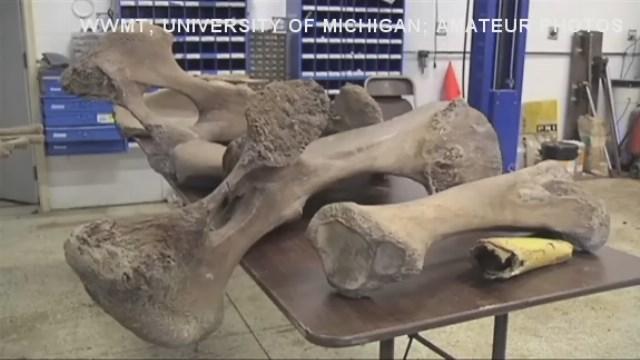 A mastodon was found in the back yard of a family's home in Bellevue Township, Michigan.

In November, Eric Witzke was having a contractor dig a pond in his back yard.

It was a simple project that soon opened up a prehistoric portal.

"It was amazing to see these bones and see the size of these bones coming up out of the ground," Witzke said.

Contractor and neighbor Daniel Lapoint, Jr. was doing the digging.

"It was just something different. I automatically assumed dinosaur. That's what popped into my head," LaPoint said.

LaPoint and Witzke dug up a total of 42 bones.

Putting the bones together painted a clear picture of the huge creature.

It was a mastodon.

"I'm speechless because it's just a once in a lifetime find," LaPoint said.

They brought in an expert from the University of Michigan. He determined the bones were from a 37-year-old male mastodon who lived between 10,000 to 14,000 years ago.

"You stop and think, they were walking around here," Witzke said.

Mastodons are related to elephants and weighed about 5 tons.

"He had thought the mastodon had been butchered. That humans cut it up, utilized the pond area for their refrigerator," LaPoint said.

The mastodon has become a local celebrity.

The family is considering donating the bones to museums and schools.

"I was that kind that was standing on the other side of the rope that wanted to touch these things. And now I can, and I want other kids the opportunity to be able to touch them," LaPoint said.

In the spring, they're planning a dig to see what else they can find.

"Some people find oil, we were lucky to find mastodon bones," Witzke said.