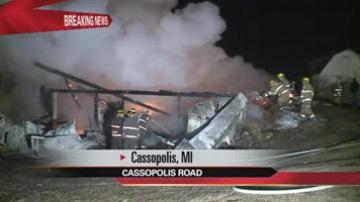 CASSOPOLIS, Mich. -- A Michigan farming family lost half a dozen calves as well as 2 tractors during a barn fire Tuesday morning. The fire happened at a home in the 18000 block of Cassopolis Road just before 4 a.m.

Firefighters say that maintaining their water source was their biggest issue while fighting the fire.

The closest hydrant to the scene was a 20-minute drive away, so crews had tankers take trips dropping water off at a portable water tank close to the fire.

Crews say it made fighting the fire more difficult because it meant taking men off the fire.

The homeowner says there were heating lamps in the barn to keep the calves warm, which may have started the fire, although there's no official word yet on the cause.