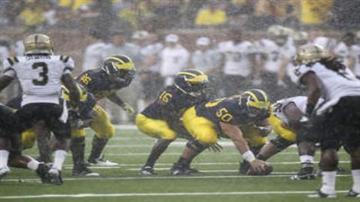 ANN ARBOR, Mich. -- Michigan has beaten Western Michigan 34-10 in a game stopped late in the third quarter because of lightning.

Both schools agreed to cancel the game with 1:27 left in the third during a second weather delay.

The Wolverines won Brady Hoke's debut with linebacker Brandon Herron returning an interception 94 yards for a touchdown and scoring again on a fumble return.

Fitzgerald Toussaint had 11 carries for 80 yards and ran for two TDs.

Denard Robinson was 9 of 13 for 98 yards and ran eight times for 46 yards, making him the team's third-leading rusher in the game.

Alex Carder was 22 of 31 for 183 yards for the Broncos with one interception and two fumbles. Jordan White had 12 receptions for 119 yards for the Mid-American Conference school.

Carder got off to a strong start, leading a 15-play, 74-yard drive capped by Antoin Scriven's 1-yard run on fourth down to cap the first drive in the opener for both teams.

Michigan answered with Toussaint scoring on a 1-yard run on the ensuing drive.

Western Michigan had chances to score on each of its next two possessions, but missed a field goal and had a pass tipped by linebacker Jake Ryan that Herron returned for 94 yards in the longest interception return for a go-ahead score.

Toussaint scored on a 2-yard run on the Wolverines' next drive and Brendan Gibbons' extra point was blocked, putting them ahead 20-10 late in the first half.

The game was delayed for the first of two times early in the third quarter.

Following a 30-plus minute delay, Michigan safety Jordan Kovacs blitzed to force Carder to fumble and Herron scooped it up for a 29-yard return to make it 27-10.

Michael Shaw's 44-yard TD that was set up by Toussaint's 43-yard run proved to be the final score.

The Wolverines were driving for another score when the game was suspended because of lightning. Nearly an hour later, the game was called with the result and statistics standing in what school officials say is the first weather-shortened game in the 132-year history of college football's winningest team.