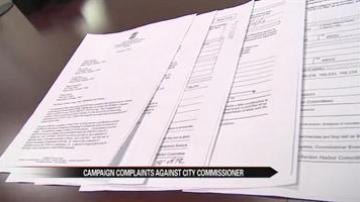 BENTON HARBOR, Mich. -- ABC 57 was the first to tell you about a state investigation into Commissioner Trenton Bowens for money that might have been collected and spent in support of a city tax without being reported to the state.

ABC 57 has been working with the Michigan Secretary of State’s office all week.

The state’s elections bureau helped ABC 57 get a hold of the formal complaints that were filed against Commissioner Bowens.

As it turns out, Bowens is not the only person under investigation.

The state says they are looking into two things: Did this group of people campaign without registering their committee with the state?  Did the group accept and spend over $500 while campaigning?

The complaints were filed by an organization called Citizens for the Success of Benton Harbor.

The group’s complaints allege that Bowens and others used donated funds to buy everything from yard signs to radio and tv air time.

Commissioner Bowens declined an on camera interview again but he says he stands firm on the belief that he did nothing wrong.