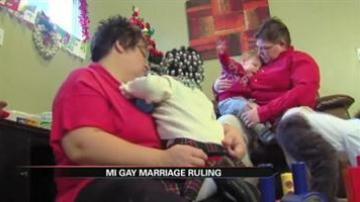 NILES, Mich.-- A federal Judge in Michigan struck down the state's ban on gay marriage on Friday, and it's a major victory for those who support marriage equality.

April DeBoer and Jayne Rowse are two nurses in Detroit who cried tears of joy on Friday because their three special needs children can officially have two parents.

DeBoer said, “You know we are just so happy! And proud that Michigan is on the right side of history and that we were able to stand up and say this wasn’t fair.”

Rowse said, “She’s not the recognized parent that the court or the law say she is in Michigan, and now she’s going to be!”

However, many in the Michiana community said supporting same-sex marriage is against their religion.

However, many in Niles are excited about the ruling.

Thomas Briand said, "It’s their freedom to get married and do as they please as a human being.”