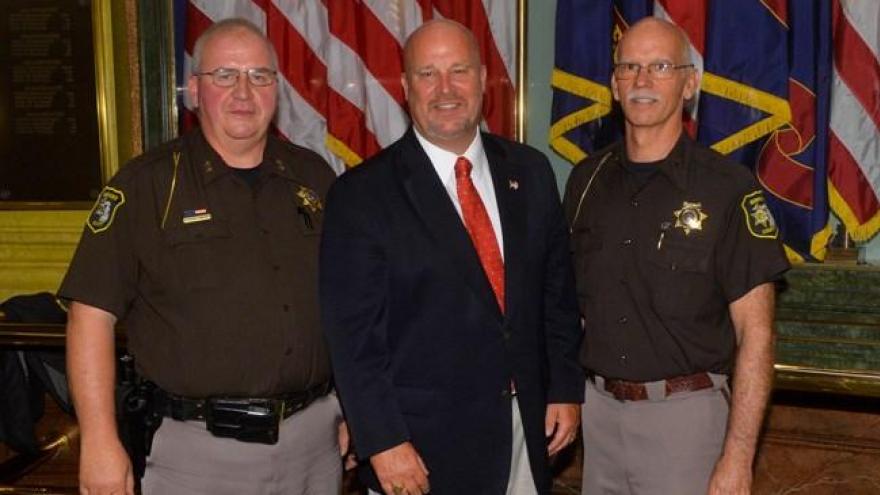 The Michigan House of Representatives held a special session to memorialize the 15th anniversary of the September 11th terrorist attacks and honor first responders and military personnel who lost their lives in the last year.

Bailiffs Joseph Zangaro and Ronald Kienzle were honored at the ceremony. They were both shot and killed by an inmate attempting to escape from the Berrien County Courthouse on July 11.

“I invited the sheriff and chaplain because they lost two of their own in a senseless act of violence in the Berrien County Courthouse,” said Rep. Pscholka, who announced the two slain court officers’ names during the ceremony. “I thought it only appropriate that they take part in the ceremony that honors their friends and colleagues.”

“Today we take a somber moment to reflect on the lives lost and those forever changed by the Sept. 11 terrorist attacks, we honor those who died serving our own communities including Joe and Ron, and we thank the men and women who continue to protect us daily,” Rep. Pagel said. “Their dedication and commitment to answering our emergency calls provides all Michigan residents peace-of-mind and security.”

The House also recognized the 12 first responders and three members of the military from Michigan who have died in the line of duty since September 11, 2015.

Both bailiffs were also honored in the Michigan Senate after senators passed a resolution honoring 9/11, first responders and those who have fallen in the line of duty.

Here are highlights of Proos’ remarks:

“Fifteen years ago, on Sept. 11, we saw one of the greatest losses of life in American history in New York, Washington D.C. and Pennsylvania. But it was a tragedy that did in fact unite us as Americans.

“I believe that it’s a testament to our nation and our nation’s resolve that when attacked, we came together as a stronger nation dedicated to the ideals of freedom and liberty. 9/11 illustrates that freedom, the fact that it’s not free and reminds us that our country has a great way of life worth defending.

“I would like to ask for a moment of silence to honor the men and women who serve our state and our nation in uniform and for the brave first responders as we commemorate the memories of the two bailiffs in Berrien County here on this anniversary of 9/11.”